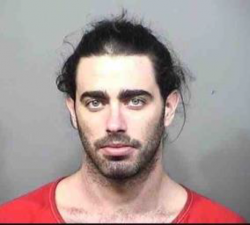 The Brevard County Sheriff’s Office, has arrested 28-year-old, Robert Jaron Hamm for stabbing his parents in an early morning domestic incident that occurred in unincorporated Titusville. Hamm is being charged with two counts of Attempted First Degree Murder Domestic Violence. He was transported to the Brevard County Jail Complex where he is being held on a No Bond status.

The investigation started after deputies responded to the area of 1481 North Highway 1, Titusville at approximately 4:45 a.m. upon receiving information that a female had been injured by her son. Upon arrival of deputies, the female victim advised that she had been stabbed by her adult son and she believed that her husband and the suspect were still inside the residence. Deputies entered the residence and located the step-father who was also seriously injured. Deputies did not locate the suspect within the residence.

Both victims were transported to a local hospital in serious, but stable condition.

An extensive search of the area was undertaken by deputies with the assistance of officers from the Titusville Police Department. The suspect was located and taken into custody without incident after officers from Titusville observed him in the area of Jay Jay Road and Snowy Egret, Titusville.

The investigation continues into the circumstances surrounding the domestic incident and anyone with information in reference to this investigation is asked to please call Agent Cynthia Young of the Brevard County Sheriff’s Office, Special Victims Unit at 321-633-8419.