Tallahassee, Fla. (February 7, 2018)—The Florida Sheriffs Association (FSA) is pleased to announce that Brevard County Corrections Deputy Carissa LaRoche has been selected as the 2018 Corrections Deputy of the Year. Each year the award is presented at the FSA Winter Conference to an officer who has demonstrated exceptional service in the line of duty. This award is sponsored by Star & Shield Insurance Services. 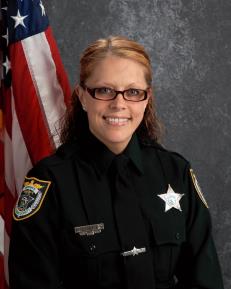 Corrections Deputy LaRoche has been a member of the Brevard County Sheriff’s Office for nine years. She is commended for her consistent devotion, professionalism and acts of heroism in the line of duty. In response to her unparalleled response and dedication to the corrections field, she has been nominated for numerous recognitions including multiple Life Saving Awards, Corrections Deputy of the Month awards and many other commendation report awards.

Among her acts of heroism, LaRoche has saved numerous lives while working in the Brevard County Correction Facility. On July 30, 2017, she observed an inmate in the Jail Complex Female Annex who appeared to be having a seizure. She jumped into action, calling all necessary medical assistance and then moved the inmate to the floor where she performed CPR for seven minutes until the EMT arrived.

On September 24, 2017, Corrections Deputy LaRoche saved another inmate’s life upon his arrival to the Brevard County Jail Complex. After another Deputy called for assistance with an unresponsive inmate being transported into the jail. LaRoche was the first to arrive on scene where she assessed the victim and began CPR, which lasted for five minutes until the inmate began breathing again. Jail complex medical staff again commended her quick response and expert implementation of CPR, which ultimately saved the inmate’s life.

She exemplified her perseverance once again on August 17, 2017, when a female inmate suddenly fell to the ground due to a seizure shortly after being relocated to a holding cell. The booking nurse was quick to respond to the scene; however, she was unable to revive the inmate. LaRoche then grabbed the AED, attached the pads to the inmate and followed with chest compressions for 15 minutes until the patient was revived.

The inmate was transferred to a local hospital where it was determined she was suffering from a drug overdose, and sadly passed away shortly after.

Sheriff Wayne Ivey stated, “We are incredibly proud of Carissa as her dedication and pride is unparalleled, as she serves as a role model for all Corrections Deputies throughout our agency and other agencies across the state of Florida!!”

During the annual winter conference banquet, LaRoche was given a standing ovation from the 500-plus law enforcement attendees and their supporters.

Sheriff Wayne Ivey additionally stated, “I could not be more proud of our team for their amazing professionalism, heroic acts of courage and their commitment to protecting our citizens. Their actions are what make our agency one of the most professional agencies in the country and I am honored to be part of their team!!”