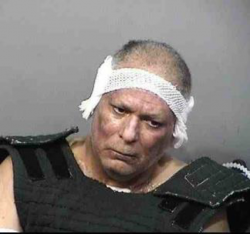 The Brevard County Sheriff’s Office Homicide Unit is investigating the circumstances surrounding the death of Palm Bay Homicide defendant, 65-year-old, Edgard Fuentes. Fuentes was found dead at the Brevard County Jail shortly after midnight Saturday, January 20, 2018. He was being held on First Degree Premeditated Murder charges stemming from an incident that occurred on January 11, 2017 in the city of Palm Bay. Fuentes had been incarcerated since his arrest on February 1, 2017.

The investigation has revealed that Fuentes was housed in general population with a single cellmate. His cellmate left the room for approximately 15 minutes on the morning of January 20, 2015. Upon returning to the cell, the roommate observed Fuentes slumped forward with a sheet around his neck, attached to the bed frame. The roommate immediately alerted corrections deputies who responded to the cell and attempted to revive Fuentes without success.

The investigation is continuing and anyone with information is asked to contact Brevard County Sheriff’s Office Homicide Agent Don Reynolds at (321)633-8413.

For additional information concerning the death investigation or this News Release, please call PIO Tod Goodyear of the Brevard County Sheriff’s Office at 321-501-7594. Any inquiries in reference to the Palm Bay Homicide should be directed to the Palm Bay Police Department.