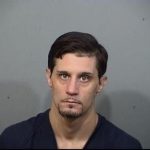 The Brevard County Sheriff’s Office has arrested 32-year-old, Toma Lee Couture of Cocoa, for a robbery that occurred at the Space Coast Credit Union in Pt. St. John. Couture was located and taken into custody in the area of the robbery early this afternoon and is being charged with Armed Robbery (Implied Weapon), Grand Theft, Written Theft to do Violence, Resisting Arrest without Violence, and Violation of Probation.

Couture was transported to the Brevard County Jail Complex where he is being held with No Bond.

The robbery occurred this morning at approximately 11:30 a.m. when a male subject walked up to the teller and passed a note demanding money. The teller complied with the man and the suspect fled from the bank on foot. As deputies were responding to the area, a citizen advised that the suspect was seen running south from the bank. Patrol Deputies and K-9 Deputies set up a perimeter in the area and began a search for the suspect. Shortly thereafter, the suspect was observed by a deputy running into a densely wooded area behind the Winn Dixie plaza. K-9 and patrol units entered the area with the assistance of the Sheriff’s Aviation Unit. The suspect was located and taken into custody without incident. The suspect was later identified as Couture. He was positively identified by the teller and surveillance video from the bank.

The following link can be used to view the video of the arrest taken by the Aviation Unit https://youtu.be/FKZu1DrSL8E.

Anyone with information in reference to this investigation is asked to please call Agent Jamie McGowan of the Brevard County Sheriff’s Office, North Precinct, General Crimes Unit at 321-264- 5210.