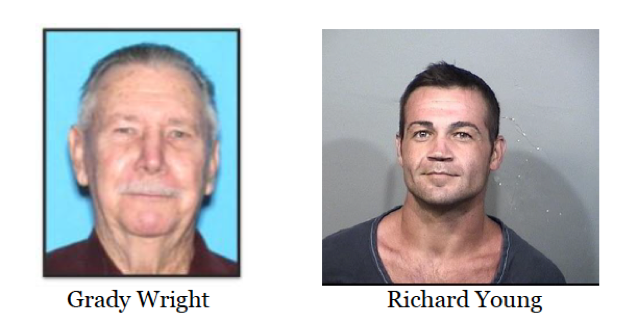 A Brevard County Grand Jury has indicted 35-year-old, Richard Glen Young of Titusville, charging him with 1st Degree Premeditated Murder in the homicide of 80-year-old Grady Wright. Young was taken into custody by the Brevard County Sheriff’s Office yesterday evening. Young was located at the Bridges of Cocoa, a Detention Facility, where he was in the custody of the Department of Corrections, serving a work release sentence for an unrelated incident. Young was transported to the Brevard County Jail Complex where he remains on a No Bond status.

The investigation began on February 17, 2017, after deputies responded to 3535 Sunset Avenue, Scottsmoor, at approximately 10:30 pm. The response was initiated after a 911 call was received stating that a friend had discovered the deceased body of Mr. Wright. The friend advised that they went to the residence to check on Mr. Wright after he failed to show for a planned dinner. An autopsy was conducted by the Brevard County Medical Examiner who determined the death to be a homicide.

The investigation revealed that Young, who owns a tree service, was at the victim’s house trimming trees on the day of the homicide. Witness statements along with evidence collected at the scene and during the investigation implicated Young. This evidence was presented to the Grand Jury on February 27, 2018, where an indictment was returned.