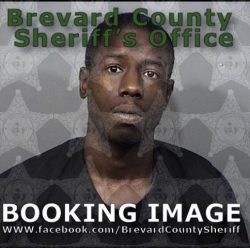 Agents with GAMEOVER Task Force have arrested 27-year-old, Antonio Scott of Palm Bay for a shooting that occurred on July 10, 2018, in Merritt Island. Scott was charged with Attempted First Degree Murder, Shooting into an Occupied Dwelling and Possession of a Firearm by a Felon. Scott is currently being held at the Brevard County Detention Center with NO BOND.

The investigation began on Tuesday, July 10, 2018, at approximately 2152 hours, when the Sheriff’s Office received several 9-1-1 emergency calls in reference to a shooting that just occurred at the Tropical Manor Apartments located at 1165 Jordan Road, Merritt Island.

When deputies arrived on-scene, they discovered that two apartments and one vehicle had apparently been shot into during the incident. At the same time they were arriving at the apartment complex, deputies also learned that a male victim later identified as 28-year-old, Michael Green Jr. of Merritt Island, had been dropped off at a nearby fire station with a gunshot wound, where the victim claimed to have been shot at the Tropical Manor Apartments. The victim was transported to an area hospital for medical treatment where his injuries were determined to be non-life threatening.

Agents from the East Precinct General Crimes Unit along with members of our Crime Scene Unit responded to the scene and assumed the investigation. Through their investigative efforts, agents were able to positively identify Antonio Scott as the person who had shot the victim and authored a warrant for his arrest.

Anyone who may have information about this investigation is asked to please call Agent Phillip Urbanetz of the Brevard County Sheriff’s Office East Precinct General Crimes Unit at 321-454-6640 or CRIMELINE at 1-800-423-TIPS (8477). All calls to CRIMELINE are confidential and callers can remain anonymous and be eligible for a reward.