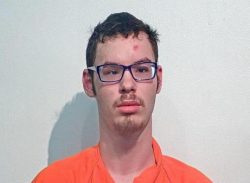 A joint investigation between the Brevard County Sheriff’s Office and Immigration Customs Enforcement/Homeland Security Investigations, has led to the arrest of 21-year-old, Alexander Barter of Joaquin, Texas. Barter was arrested on Friday, October 19, 2018 in Texas on charges of Criminal Solicitation, Criminal Attempt: Capital Murder, Conspiracy to Commit Capital Murder and Criminal Attempt: Sexual Performance of a Child.

Barter appeared before a Federal Magistrate on October 26, 2018 to face Federal charges of Child Exploitation. If convicted, Barter faces a maximum penalty of Life in federal prison. The case is being prosecuted by the U.S. Attorney’s Office East District of Texas.

The investigation began when an undercover agent from the Brevard County Sheriff’s Office who is a member of a U.S. Immigration and Customs Enforcement’s Homeland Security Investigations Task Force observed a post on the Internet where Barter was looking for anyone who would allow him to commit necrophilia and cannibalism. The undercover agent, who was posing as an interested participant responded advising that he had a minor child he could provide. Over the course of several days, the agent and Barter communicated with Barter asking if he could kill the child and detailed gruesome acts that he would like to do to the intended victim before and after death.

After further conversation, Barter created a plan where he could meet the agent and potential victim who would be taken to a rural area where the child would be sexually assaulted, killed and then cannibalized. The BCSO agent travelled to Texas for the meet with the undercover agent and child. Barter was arrested without incident as he showed up for the meet. At the time of his arrest, Barter was found to be in possession of a knife and plastic trash bags to portion and transport the remains.

The investigation into the history of this defendant is continuing.

The Brevard County Sheriff’s Office Sexual Offender/Predator Registration and Tracking Unit was created in 2005 to register and track sexual offenders/predators in Brevard County. Agents were also assigned to the unit to investigate cases of child exploitation. These agents have arrested numerous individuals who have travelled from as far as Switzerland for the purpose of exploiting children. The agents have been recognized multiple times on a local, national and international level for their investigative expertise and have worked with both Federal and State legislators to enact laws that further protect the victims of sex abuse, cyber harassment and child exploitation.