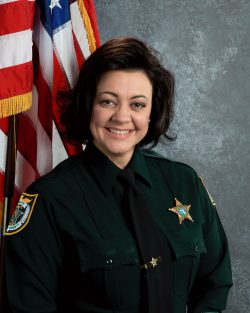 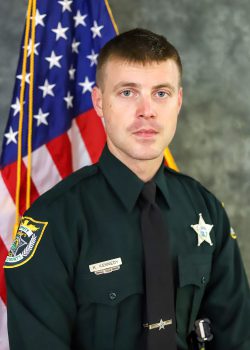 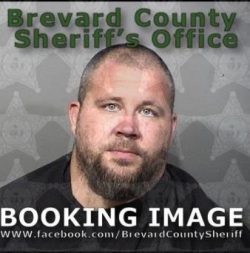 Corporal McLaughlin has been a member of the Sheriff’s Office since October 2010. She has served as a Deputy, Field Training Officer, and Agent. She was promoted to Corporal in July 2017 and is currently assigned to the Cape Canaveral Precinct.

Field Training Officer Kennedy has been a member of the Sheriff’s Office since September 2015. He served as an Animal Care technician prior to his successful completion of the Police Academy, after which he was hired as a Deputy in July 2017.  He was promoted to Field Training Officer in December 2020 and is currently assigned to the Cape Canaveral Precinct.

The preliminary investigation has determined that on Sunday, January 31, 2021, at approximately 3:35 a.m., the Brevard County Sheriff’s Office received a call from a female on Grant Avenue, Cape Canaveral, advising there was a suspicious person outside of her residence.  Deputies responded, but did not locate anyone and cleared the scene.

At approximately 3:48 a.m., in the area of Ridgewood Avenue and Hayes Avenue, Cape Canaveral, a second call was received from a separate homeowner advising that a suspicious person had been observed around their residence. At approximately 3:53 a.m. Corporal McLaughlin and FTO Kennedy arrived at the location and began looking for the subject. Corporal McLaughlin then observed the suspicious male, who had been concealing himself, and made contact with him.

The suspect, who was only feet from Corporal McLaughlin, then discharged a firearm at her multiple times. The suspect was then challenged by FTO Kennedy, who responded to the lethal threat with deadly force by discharging his agency issued handgun.

The suspect, who sustained one non-lethal wound by FTO Kennedy, then fled on foot a short distance before he sustained a single self-inflicted gunshot wound. Deputies administered life saving measure to the suspect while on scene. Brevard County Fire Rescue responded and transported the suspect to a local hospital for medical treatment, where he underwent surgery and is currently in stable condition.

The suspect in this case is identified as 35-year-old Jonathan Lee Layton of Cape Canaveral.  Layton is the respondent to an active domestic violence injunction for protection issued on behalf of the female who made the original call.  He is also out on bond in reference to felony charges in Indian River County.

The investigation is active and ongoing at this time.  Both deputies have been placed on paid administrative leave, as is customary in all deputy involved shootings. Once the investigation is complete, it will be submitted to the State Attorney for review.

Anyone who may have information about this incident is asked to please call Agent Don Reynolds of the Brevard County Sheriff’s Office at 321-633-8413.