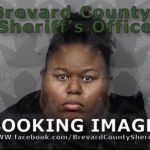 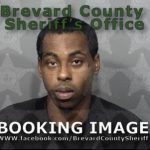 The Brevard County Sheriff’s Office has arrested a former Corrections Technician and a Brevard County Jail inmate for introducing illegal contraband into the jail facility.

Earlier today, 28-year-old, Jaleena Dixon and 24-year-old Kqamane Brown, both of Cocoa, were arrested after a warrant was issued by the Honorable Judge Charles Crawford, charging each with Introduction of Contraband into Detention Facility (narcotic), Introduction of Contraband into Detention Facility (Cellular Telephone), Sexual Misconduct Between Detention Facility Employee and Inmate, Possession of a Controlled Substance (Methamphetamine) and Unlawful Use of a two-way Communication Device, Dixon was taken to the Brevard County Jail on a $21,000 bond and Inmate Brown who was already incarcerated at the County Jail is being held on a No Bond status.

It was learned that Dixon used her position as a Corrections Technician working in the control center to allow her access to Inmate Brown. The relationship and transfer of contraband occurred while Inmate Brown was secured in an area near Dixon while other correctional personnel were occupied with inmates.

Inmate Brown has been incarcerated at the Brevard County Jail since July 6, 2019, on charges of Lewd and Lascivious Molestation on a Child, Possession of Heroin and Possession of Ecstasy.

Former Corrections Technician Dixon was hired in March of 2020. Dixon was terminated from her employment with the Sheriff’s Office on October 2, 2020.

Anyone who may have information about this investigation is asked to please call the Brevard County Sheriff’s Office SORT Unit at 321-633-8407.