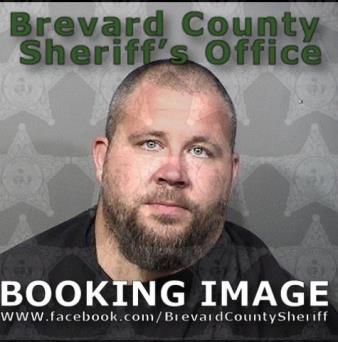 Yesterday evening, 35-year-old Jonathan Lee Layton of Cape Canaveral was arrested for attempting to kill two Brevard County Sheriff’s deputies. Layton was arrested following his release from a local hospital after a warrant was issued by The Honorable Judge Curt Jacobus, charging Layton with Attempted 1st Degree Murder with a Firearm (2 Counts), Possession of a Firearm by Convicted Felon, Violation of Injunction for Protection of Domestic Violence, Armed Trespass, Resisting an Officer with Violence, resisting an Officer Without Violence, Use of a Firearm in Commission of a Felony and Loitering and Prowling. He was transported to the Brevard County jail where he is being held on a No Bond status.
The charges come from an incident that occurred on Sunday, January 31, 2021, at approximately 3:35 a.m., when the Brevard County Sheriff’s Office received a call from a female on Grant Avenue, Cape Canaveral, advising there was a suspicious person outside of her residence. Deputies responded, but did not locate anyone and cleared the scene.

At approximately 3:48 a.m., in the area of Ridgewood Avenue and Hayes Avenue, Cape Canaveral, a second call was received from a separate homeowner advising that a suspicious person had been observed around their residence. At approximately 3:53 a.m. Corporal McLaughlin and FTO Kennedy arrived at the location and began looking for the subject. Corporal McLaughlin then observed the suspicious male, who had been concealing himself, and made contact with him.

The suspect, later identified as Layton, who was only feet from Corporal McLaughlin, then discharged a firearm at her and FTO Kennedy. The suspect was then challenged by FTO Kennedy, who responded to the lethal threat with deadly force by discharging his agency issued handgun.

Layton, who sustained one non-lethal wound by FTO Kennedy, then fled on foot a short distance before he sustained a single self-inflicted gunshot wound. Deputies administered life saving measures to him while on scene. Brevard County Fire Rescue responded and transported Layton to a local hospital for medical treatment.