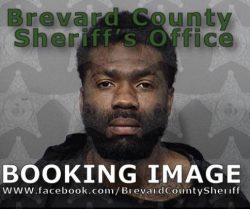 The Brevard County Sheriff’s Office is identifying the deceased suspect involved in yesterday’s deputy involved shooting incident that occurred in West Melbourne.  The deceased is 38-year-old Paris Wilder of Cocoa.  Wilder was a registered Career Offender with 40 previous arrests including 23 felony arrests for charges that included:  Robbery with a Firearm, Aggravated Assault with a Weapon, multiple narcotics offenses, Battery of a Law Enforcement Officer, and Attempted First Degree Felony Murder.  Wilder was out on bond for two felony drug charges and had two active felony warrants at the time of the incident.

The preliminary investigation has determined that on Monday, August 30th, at approximately 1:00 p.m., a deputy conducted a traffic stop in area of I-95 and SR 192 on a vehicle in which Wilder was a passenger.  During the traffic stop, an additional deputy arrived on scene and began assisting with the three adult occupants of the vehicle.  When the suspect was asked to exit the vehicle, Wilder immediately opened the door armed with a rifle and began shooting at the deputies.  Deputies returned fire in an effort to save their own lives, as well as the lives of others at the scene, which included a 2-month-old infant located in the rear of the suspect vehicle.   During the exchange of gunfire, one deputy was shot in the lower leg and sustained a non-life threatening injury.   The injured deputy was also attacked by Wilder with multiple strikes to the head with the butt of the rifle.   As the attack on the injured deputy continued, the original deputy was able to end the threat by using deadly force and shooting Wilder.

The injured deputy was taken to a local hospital where he is in stable condition and expected to make a full recovery.

The investigation is active and ongoing at this time with the names of the deputies not being released.  Both deputies are on paid administrative leave, as is customary in all deputy involved shootings.  Once the investigation is complete, it will be submitted to the State Attorney for review.

Anyone who may have information about this incident is asked to please call Agent Don Reynolds of the Brevard County Sheriff’s Office Homicide Unit at 321-633-8413 or CRIMELINE at 1-800-423-TIPS (8477).  All calls to CRIMELINE are confidential and callers can remain anonymous and be eligible for a reward.