The Brevard County Sheriff’s Office is identifying the deputies and suspect involved in the shooting incident that occurred on November 9, 2021, at Rotary Park located in Merritt Island.  The deputies are identified as Field Training Officer Christopher Anterio and K-9 Deputy David Dixon.

K-9 Deputy Dixon has been a member of the Brevard County Sheriff’s Office since April 2017, and is currently assigned to Operational Services.   He was assigned as a K-9 Deputy in February 2019.   Deputy Dixon also proudly served in the United States Marine Corps from 2012 to 2016.

The preliminary investigation has determined that on November 9, 2021, at approximately 10:40 p.m., the Brevard County Sheriff’s Office responded to a robbery that occurred at the Sunoco gas station located at 600 South Courtenay Parkway, Merritt Island.   The female clerk advised that a male suspect wearing dark colored shorts and a dark colored hoodie entered the store and battered her during the robbery.   The clerk further advised that the male suspect fled the area in a small, silver colored SUV.

Within minutes of the robbery, an anonymous call was received advising of a suspicious person armed with a handgun at Rotary Park, located at 1899 South Courtenay Parkway, Merritt Island.   Deputies responded to the area and observed a male and vehicle in the park that matched the description of the robbery suspect.  Upon observing the deputies, the suspect told them he was armed with a Smith & Wesson handgun.   The suspect began advancing towards the deputies, while concealing his hands in his hoodie and ignoring their commands.   As he continued advancing, the deputies observed the male pull what appeared to be a handgun from his hoodie and pointed it at them.   The deputies responded to the lethal threat by discharging their firearms, striking the suspect.  The male was transported to a local hospital for medical treatment.

Subsequent investigation determined that the weapon the suspect pointed at the deputies was a flare gun.   It was also learned that the suspect was the anonymous caller who reported the suspicious male in the park armed with a handgun. 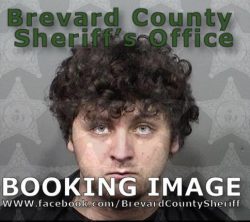 The suspect in this case is identified as 22-year-old Matthew Robertson of Merritt Island.  An arrest warrant has been issued charging Robertson with Attempted Robbery with a Deadly Weapon, Aggravated Battery and False Imprisonment, stemming from the robbery at the Sunoco gas station.  A second arrest warrant has been issued charging Robertson with four counts of Aggravated Assault on a Law Enforcement Officer with a Firearm, for the incident at Rotary Park.   Robertson is being transported to the Brevard County Jail Complex from a local hospital where he was being treated for his injuries and will be held on a no bond status.

At the time of the incident, Robertson was also out on bond in reference to Failure to Appear on Battery charges.

The investigation is active and ongoing at this time.  Both deputies have been placed on paid administrative leave, as is customary in all deputy involved shootings.  Once the investigation is complete, it will be submitted to the State Attorney for review.

Anyone who may have information about this incident, is asked to please call Agent Samantha Grimes of the Brevard County Sheriff’s Office at 321-633-8413.