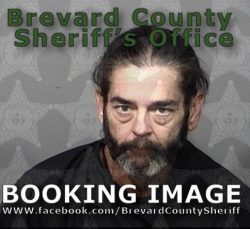 The Brevard County Sheriff’s Office has arrested 49-year-old Cory Lyle of Melbourne for the shooting death of Joseph Hall that occurred in Merritt Island on June 9, 2022.  Lyle was arrested after an arrest warrant was issued by Judge David Silverman, charging him with First Degree Felony Murder, Armed Occupied Burglary and Grand Theft of a Firearm (two counts).  He is currently being held at the Brevard County Jail Complex on a No Bond status.

The investigation began when deputies responded to a residence on Hunt Drive in Merritt Island on June 9, 2022, at approximately 9:00 p.m., after the Sheriff’s Office was contacted by Hall’s roommate who returned home and found a male deceased in the residence.   Upon the deputies arrival, they located Hall who was pronounced deceased at the scene.  Based on evidence collected and statements gathered during the investigation Agents determined that Lyle shot the victim while committing a burglary at the residence.

Lyle was taken into custody without incident at a residence in Satellite Beach shortly before midnight on June 10, 2022.

Anyone who may have information about this death investigation is asked to please call Agent Mitch Matthias of the Brevard County Sheriff’s Office Homicide Unit at 321-633-8413  or CRIMELINE at 1-800-423-TIPS (8477). All calls to CRIMELINE are confidential and callers can remain anonymous and be eligible for a reward.