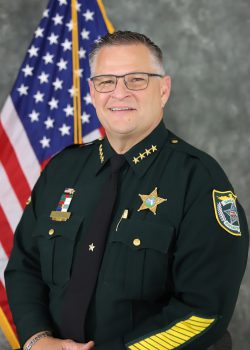 Sheriff Wayne Ivey has been a Law Enforcement Officer for over three decades. Sheriff Ivey is a graduate of the FBI National Academy and has a Bachelor’s Degree from Daytona State College in Management and Supervision. Sheriff Ivey’s background in law enforcement is inclusive of Management, Criminal Investigations, Narcotics, Patrol Services, Public Integrity Investigations, and Corrections.

Sheriff Ivey has testified before the United States Congress on law enforcement related matters and has extensive experience in the area of Public Integrity Investigations. Sheriff Ivey was honored as the Florida Department of Law Enforcement’s Special Agent of the Year (1996) and was also recognized by the Commissioner of the Florida Department of Law Enforcement for his Outstanding Contributions to Criminal Justice. In August of 2011 Sheriff Ivey was honored by the National Organization of Victims Advocacy for his work at the national level as an advocate of victim’s rights and protection.

Sheriff Ivey speaks regularly on topics such as Identity Theft, Crime in America, Human Trafficking, Domestic Violence, and Self Defense through Mental Preparedness. Sheriff Ivey firmly believes that Crime Prevention and Education are vital to reduce our crime rate and protect our community.