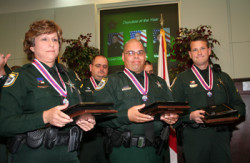 In 2006, BCSO recognized Deputy Marie Clark, FTO Robert Cline, and Deputy Jose Santos with the Deputy of the Year for their display of exceptional courage and teamwork in a life-threatening situation. Without hesitation, they put their lives in danger to save the lives of a mother and her children from a distraught father who was attempting to kill himself and anyone near him by igniting a full propane tank with a lighter.

In addition to being selected as our 2006 Deputy of the Year, each Deputy was also recongnized with the Agency’s highest honor…the Medal of Valor. 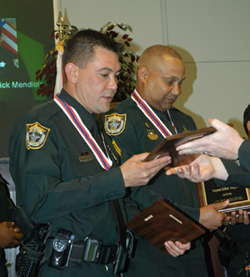 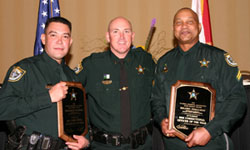 Corporal Belden Ferguson & CO Frederick Mendiola
These Corrections Officers have been awarded the 2006 Corrections Officer of the Year Award for distinguishing themselves during a life threatening situation at the Brevard County Jail Complex in January 2006. Both of these outstanding officers were instrumental in preventing the escape of an inmate from the jail after the inmate commandeered a prisoner transport van.

In addition to being selected as our 2006 Corrections Officers of

the Year, each Officer was also recognized with the Agency’s highest honor…the Medal of Valor and have been selected by the Florida Sheriff’s Association as the 2006 Corrections Officers of the Year for the entire State of Florida. 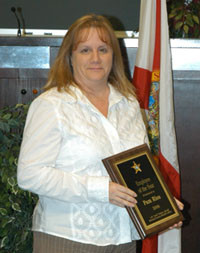 Pam was selected as the Employee of the Year for 2006 for her outstanding work with the Investigative Support Unit. In a very short period of time, she created and designed a very user-friendly computer program.

She was assigned to support the Special Investigations Unit agents over the course of a twenty month intensive investigation of a large drug ring, culminating in the arrest of thirty-two suspects who were trafficking narcotics in and out of our County. Her work on this case involved the entry of literally thousands of critical pieces of information into an investigative data base for use by agents in tracking and ultimately wire-tapping the suspects in this case.

Her experience and ability to pull together fragments of information into a cohesive analysis and disseminte this information in a clear and timely manner is a hallmark of her performance. Many agents have commented that many of the highest profile arrests would not have been possible without her assistance.

Communications Officers of the Year Award 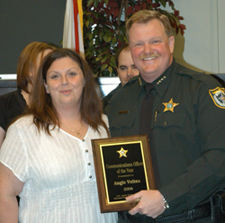 The first event occurred during heavy radio traffic and involved a third party call about a suicidal man. Angie quickly retrieved important information from the caller to get help to the man. She then made contact with the suicidal man and stayed on the line with him keeping him calm until deputies were on scene. Her actions contributed significantly to saving the man’s life.

In addition, she has a great reputation among her peers as a professional who can always be depended on to assist others in any situation although she really shines in emergency situations when the most is at stake. 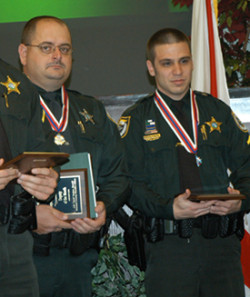 The law enforcement Medal of Valor is the highest award given to civilian law enforcement officers in our nation. It signifies that the recipient performed his or her duties above and beyond the call of duty in a life-threatening situation. It is the most scrutinized award. It must not only be recommended by the Awards Committee, it must receive a unanimous endorsement from every member of the Command Staff.

FTO Steve Fernez and Deputy Paul Roman were awarded the Medal of Valor for their actions on December 18th, 2005. After responding to a disturbance call in a trailer park in Malabar, Florida, it was learned that a male subject was running through the park banging on doors and attempting to break into homes in the area.

Deputy Roman located the subject in one of the homes with the resident still inside. The suspect had armed himself with a knife and a broken chair and was threatening the homeowner. Recognizing the immediate danger to the homeowner, Deputy Roman placed himself between this victim and the suspect and managed to push the homeowner to safety outside the home. After doing so, the suspect then attacked Deputy Roman who was attempting create some distance between himself and the assailant.

Backing onto a slippery porch, Deputy Roman slipped and fell. As he fell from the residence, Deputy Roman yelled to caution FTO Fernez who was now approaching to cover his fellow officer.

The suspect then exited the home and advanced on both deputies in a rage and despite orders to halt at gunpoint continued his advance. FTO Fernez fearing for the life of the citizen and his fellow officer, fired two shots at the assailant, one of which was fatal.

The courage displayed by both of these deputies in this life-threatening situation and their willingness to protect an innocent life and the lives of each other at the expense of their own serves as a sterling example of the highest standards of our profession.

Because of the timing and circumstances of this event, it was not possible to include these deputies in last years annual awards ceremony and we want to make it up to them. Upon the recommendation of the Awards Committee and with the full support of the Command Staff, they were formally recognized as Deputies of the Year for 2005. Their courage and dedication to the safety of our citizens will not be forgotten. 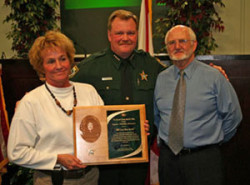 The Lucy Ross Award is presented to the employee who best exemplifies the outstanding qualities and spirit of our lost family member, Sergeant Lucille Ross. Throughout her career, Lucy demonstrated an unwavering dedication to community service and excellence in her profession. Lucy was a genuinely compassionate person who never hesitated to assist others in need, regardless of her relationship to them or their station in life. This quality was most prevalent when dealing with crime victims or their families. Despite the rigors and demands of her work, Lucy could always be counted on to arrive with a cheerful disposition and work without complaint. Lucy can most adequately be described as possessing the unique quality that allowed her to make people feel better, regardless of their circumstances. This award recognizes the BCSO family member, who throughout this year, has best honored Lucy’s memory by demonstration of these same qualities and has been nominated by his or her co-workers.

Agent Debbie Demers was selected this award for her work with children and families and her consistent volunteering at the “Children’s Burn Camp of Florida”.

Established at the Florida Elk’s Youth Camp in Umatilla, Florida, this camp provides an opportunity for child burn victims to experience the joys of childhood again in an environment that is understanding and supportive. The children engage in normal summer camp activities such as canoeing, team competitions, and archery. Individuals like Agent Demers volunteer their time to ensure that these children enjoy a safe, caring and supportive atmosphere, free of the pressures of their perceived disabilities. Such efforts are in the very spirit of why this award was established and why the Brevard County Sheriff’s Office is so proud to recognize an employee who best demonstrates the spirit that Lucy has left in the hearts of many. 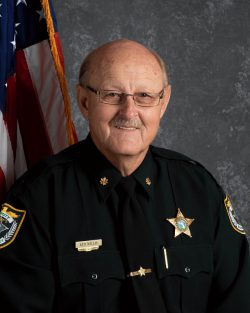 Lt. Ken Willis was presented with the 2006 Reserve Deputy of the Year Award for his unselfish dedication and services to the Sheriff’s Office and to the Brevard community. Lt. Willis is a very special Reserve Deputy that has been volunteering with the Brevard County Sheriff’s Office since March of 1987. He worked 727 hours in 2006 without any cost to our citizens. He is a certified Field Training Officer who helps train all the Brevard County Reserve Deputies. He averages more than 60 hours of deputy service per month, which is triple the 20 hours per month average.

He is certified on the airboat, riverboat and all terrain vehicle operations, which is a tremendous help to the Ag/Marine Unit.

Whenever Lt. Willis is called upon to assist the Sheriff’s Office in an event or detail, he is there to help. He does not know the meaning of the word “no”. 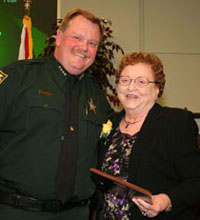 Jeanne Vance was recognized as the Volunteer of the Year for her outstanding spirit of community service and volunteerism. She has been volunteering her time assisting the South Precinct since 2003. Even at age 78, Jeanne routinely works 15-20 hours per week entering thousands of pawn tickets into the tracking system and helping the public at the front desk. Jeanne is always pleasant and is quite resourceful. The Brevard County Sheriff’s Office is fortunate to have such a dedicated volunteer. 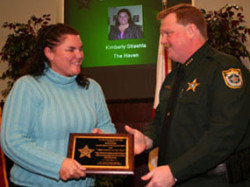 Each year BCSO recognizes a special person in our community who has dedicated their life in Brevard County to reduce crime, reduce juvenile delinquency and provide a better a safer Brevard County for our children.

Kimberly started with The Haven by volunteering her services seventeen years ago with a personal goal of creating a loving home for children in need. Since then, The Haven has expanded into two beautiful and loving homes, providing twenty-four hour care for tewnty-two foster children. A third home will be opening in 2007.

The Haven provides a stable home environment for children who need it. Efforts are made to keep brothers and sisters together. Children go to school, summer camps, and participate in sports. The Haven also works closely with the parents of foster children, giving them the training and tools they need to create strong families. The Haven is made even better by the wonderful employees and the Haven’s Guild of volunteers.

Under the leadership of Kimberly Straehla, The Haven has nurtured and protected thousands of children and strengthened families in Brevard County.

Recipients of this award have helped members of our community when thier lives were at risk.

These recipients were awarded Bar of Merit for outstanding duty performance. They have displayed unusual thoroughness, determination, and initiative while carrying out thier duties.

Corrections Officer of the Month, Year 2006

Communications Officer of the Month, Year 2006