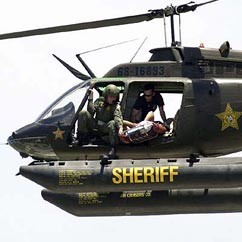 Brevard County, Florida is located in east central Florida. The county is one thousand five hundred and fifty seven square miles, twenty-two miles wide and seventy-two miles long. Land area is one thousand eighteen square miles, and the water within Brevard is five hundred thirty nine square miles. The entire eastern boundary of the county borders the Atlantic Ocean, making up seventy-two miles of beaches. Brevard County has sixteen municipalities with a population over 580,000. Brevard County is known as the “Space Coast” since it’s the home of the Kennedy Space Center and Cape Canaveral Air Force Station. Brevard County is home to Port Canaveral, one of the busiest freight and cruise ship port terminals in the country, as well as a Navy Trident turning basin for Ballistic Missile Submarines. Patrick Air Force Base and the Naval Ordnance Test Unit is also located within the county.

Prior to 1996, the Brevard County Sheriff’s Office operated a part time Aviation Unit, utilizing a Hughes 269 helicopter, and then a Robinson R22 helicopter. The Sheriff’s Office also operated several fixed wing aircraft prior to 1996, one of which was a Baron that was seized during a narcotics investigation. During this time, the unit was strictly an “on-call” unit only. When the helicopter or fixed wing was needed, a pilot would be called to respond from their other duties that they were assigned. The aircraft were stored at Space Coast Regional Airport in Titusville, which is at the north end of the county.

In 1996, the Sheriff’s Office received four flyable OH-58A+ helicopters under the 1208 program. Three of the aircraft were outfitted as patrol aircraft and the fourth was utilized as the training aircraft. The Baron was sold during this time so the first Forward Looking Infrared (FLIR 6000) System, could be purchased. 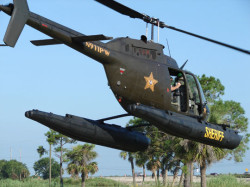 After the September 11th terrorist attacks, the duties of the Aviation Unit grew, requiring increased security at Port Canaveral during the time cruse ships were entering and exiting the port. The STAR Unit also assisted with the Temporary Flight Restrictions (TFR) during Space Shuttle launches, as well as several Presidential visits. If there was an aircraft violating the air space, it is the military fighter’s job to gain attention of the pilots, notifying them of the violation. The Aviation Unit then escorted the aircraft to airports within the county, standing by until an investigator arrived on scene.

In 2002, the first full time Tactical Flight Officer / FLIR operator was assigned to the Aviation Unit. This has greatly improved the performance of the Aviation Unit. In July 2003, the unit was awarded first place in the FLIR Vision Award at ALEA’s annual conference in Wichita, Kansas.

The Aviation Unit participates in the Project Lifesaver program, which utilizes electronic wristbands, emitting a frequency that can be tracked to help locate those who have Alzheimer’s, Dementia or subjects that wander from their familiar surroundings and become lost. These units have had great success locating children diagnosed with autism or Down’s syndrome.

In April 2004, the Aviation Unit acquisitioned a set of fixed floats that attached to the training aircraft. The need for this type of aircraft was necessary because of the increased number of water related calls that the STAR aircraft were responding to, but unable to offer any “hands-on” support. 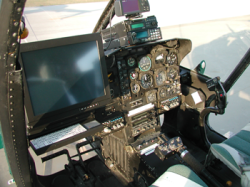 After the installation of the floats, the Aviation Unit was afforded the opportunity to train on crew deployment into water with Patrick Air Force Base’s 920th Rescue Squadron. The Aviation Unit was also trained in basic water life saving techniques with Brevard County Fire Rescue’s Ocean Life Guard Unit.

Within three months of the floats being installed onto the aircraft, “STAR FISH”, had its first water rescue. At the entrance to the St. Johns River on Lake Washington, two airboats collided, partially submerging both of them in the water, out of reach of any aid via land. Several people were injured, one critically. STAR FISH was called upon to respond and landed on Lake Washington. With the assistance of Brevard County Fire Rescue, the most critical patient was loaded into the aircraft and transported to a landing zone, where they transferred to a waiting air ambulance and flown to the trauma center in Melbourne. Because of the types of calls STAR FISH is responding to, the Aviation Unit has begun training paramedics with Brevard County Fire Rescue Station 43, which is also located at the Merritt Island Airport. The paramedics are versed on how to respond, work on, and operate around and in the float aircraft. This type of training ensures future responses of STAR FISH will have dedicated paramedics trained to respond with the Aviation Unit.

In September 2005, the Aviation Unit added a fourth full time pilot to the unit.In July 2006, the unit was awarded second place in the FLIR Vision Award at ALEA’s annual conference in New Orleans, Louisiana. In December a second full time mechanic was added to the unit.

In July 2007, the unit was awarded third place in the FLIR Vision Award at ALEA’s annual conference in Orlando, Florida and in October a second full time Tactical Flight Officer / FLIR operator was assigned to the Aviation Unit.

In 2009, the unit was awarded second place in the FLIR Vision Award at ALEA’s annual conference in Savannah, Georgia. During this year we completed the construction of new offices, maintenance shop and parts room in the hangar.

In 2015 we received a  flyable UH1H helicopter from the Department Of Defense 1033 program at a cost of 2,000.00. The aircraft is used for search and rescue/fire fighting operations. A fire medic supplied by BCFR is placed on board during search and rescue missions to provide immediate medical assistance.  At approximately the same time we received over two million dollars in  parts from the GSA program to support the UH1H. Cost for the parts was approximately 4,000.00.

The Aviation Unit trains bi-annually in Water Survival Techniques. Since 1998 the Brevard County Sheriff’s Office has utilized Lunsford Air Consulting, Inc. for all of their flight training. This includes semi-annual recurring emergency day and night procedures, as well as Night Vision Goggle training.

In Mid 2021, we replaced our ageing “FLIR” camera systems with the top of the line FLIR Star SAPHIRE 380-HD system combined with a Shot Over mapping system. The combination of these two systems greatly enhances the ability of the Sheriff’s Office air crew to assist in searches of criminals and missing/endangered people due to the superior quality of the image provided. In addition, this system also allows the air crew to provide pin point accurate location information to deputies on the ground.

Yearly, the aviation unit currently assists with approximately six to seven hundred calls for service while flying approximately 450 to 550 hours. We operate seven days a week 23 to 24 hours a day with a yearly operational budget of $154,937.00.