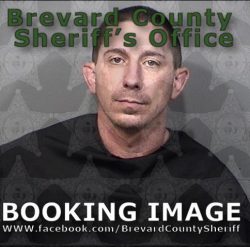 The Brevard County Sheriff’s Office has arrested 39-year-old Philip Keller of Merritt Island for the homicide of Alicia Campitelli that occurred on May 15, 2021.  Keller was arrested after an arrest warrant was signed by the Honorable Christina Serrano charging Keller with First Degree Premeditated Murder, Grand Theft, Fraudulent Use of a Credit Card and Tampering with Evidence. Keller was transported to the Brevard County Jail complex under a no bond status.

The investigation began on Saturday, May 15, 2021, at approximately 11:13 a.m., when the Brevard County Sheriff’s Office received an emergency 9-1-1 call from a male, who identified himself as Philip Keller.  Keller reported he had just arrived at his residence on Schoolhouse Street, Merritt Island, and thought his fiancé, later identified as Alicia Campitelli was dead.  Keller stated his house appeared as if it were “robbed” and his fiancé appeared as if she had been “shot.” Keller reported Ms. Campitelli was not conscious and not breathing and disconnected the 9-1-1 call shortly thereafter.

Upon the arrival of deputies at the residence, Ms. Campitelli was found with no signs of life and was pronounced deceased. Ms. Campitelli had visible trauma consistent with a gunshot wound.

Sheriff’s Office Homicide Agents and Crime Scene Investigators then processed the scene and conducted numerous interviews. One individual provided a sworn statement reporting hearing suspected gunshots at approximately 1:11 a.m., on May 15, 2021.  The witness described the gunshots coming from where Keller and the victim’s apartment is located.

The agents located video surveillance recordings of Keller conducting suspicious financial transactions at multiple business using the victim’s personal accounts between the witness statements of suspected gunshots and the reporting of the death. Agents additionally conducted multiple search warrants relating to the activities of Keller during the time immediately preceding and following the homicide.

Earlier tonight Keller provided specific information relating to the crime to a citizen who contacted homicide agents.  Deputies located Keller at a local establishment on Merritt Island, who upon seeing their arrival entered Sykes Creek in an attempt to avoid law enforcement. Keller was detained shortly after entering the water. He was transported to the BCSO Criminal Investigative Services where he was interviewed and subsequently transported to the Brevard County Jail.

Anyone who may have information about this death investigation is asked to please call Agent Carmen Minthorn of the Brevard County Sheriff’s Office Homicide Unit at 321-633-8413  or CRIMELINE at 1-800-423-TIPS (8477). All calls to CRIMELINE are confidential and callers can remain anonymous and be eligible for a reward.